The biography of Heinrich Metzendorf 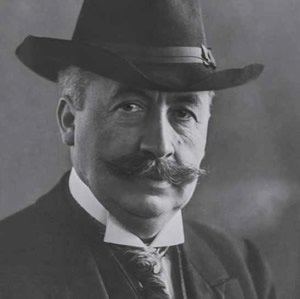 At the ceremonial for nomenclature on 11 November 2005 our school got named after the well-known Bergstraßian architect Prof. Heinrich Metzendorf (1866-1923). Heinrich Metzendorf’s stone cutter family comes from Heppenheim. After he went to grammar school, he learned to be a stone cutter and mason in his father’s firm. In 1902 he moved with his wife and their 5 children into a newly- build house with an architecture office in Bensheim, at the today’s Metzendorfplatz.

Between the years of 1902 and 1923 Metzendorf planned numerous country residences and many other buildings like school buildings, churches, hotels, tombs etc.

Like his brother Georg, Heinrich Metzendorf belonged to the pioneers of the Deutsche Werkbund which you can see in the high quality working details on his buildings. Because he was close to nature and home, he preferred building material and stylistic elements of the Bergstraße/Odenwald region like red sandstone, granite, timber frame etc. In 1899 the grand duke Ernst-Ludwig von Hessen bestowed Heinrich Metzendorf the title of a professor in honor for an especially succeeded building, the “Villa Haardteck” in Darmstadt.

Also famous as the “builder of the Bergstraße”, Heinrich Metzendorf has shaped with his architecture in the country house style the city of Bensheim and its environment and therefore underlined the appealing landscape of the Bergstraße. Most of his most imposing country houses are in the so called “Metzendorfviertel” in the direct environment of the Heinrich Metzendorf School in Bensheim-Auerbach.