In 1992, Lothar Thehos, at that time principal of the school, writes in a commemorative publication for the 25th year of existence:

“Bensheim has always been called a city of schools.”

Already in 1834, the establishment of a school for further education was required and the local trade association, established in 1844 by Dr. med. Bernhard Krauß, opened the boy’s school house and the “craftsmen Sundays school” in 1848. The 3rd of December 1848 may be seen as the actual birthday of the vocational school system in Bensheim, and actually in the whole Bergstraße district.

In the winter term 1872/73 the subject commercial bookkeeping got introduced. From 1874 the 155 students were taught in aligned vocational classes in the “continuation school”. 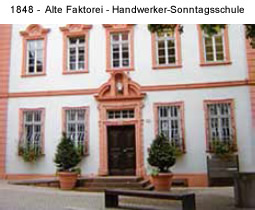 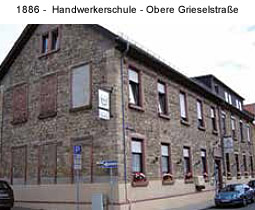 Due to the increasing number of students, an own school building of the trade association had to be opened in 1886. In 1895 it had to be extended. A new bigger building had to be built in Heidelberger Straße and got inaugurated in 1907. At the end of the school year 1910/11 the Sundays school stopped and the vocational continuation school as construction- and business as well as painting school stepped in its position.

In 1924 the city of Bensheim took the school authority.

In 1944 the school got closed due to the Second World War. 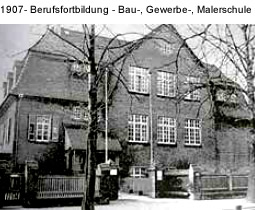 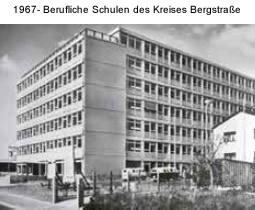 Since 1 April, 1959 the Bergstraße district is responsible for funding the district vocational school.

A detachment and independence of the trading school was in a debate.

Because of the still increasing number of students, the building had to be further extended, which led to creating new class rooms, and therefore other rooms for preparing etc. got lost. Relief was brought when the trading school moved out into a new building in the Berliner Ring in Bensheim.

1978-2004 vocational schools of the Bergstraße district

The school has had the name “vocational schools of the Bergstraße district” since 1978.

In 1997 the long term reconstruction of the school with investments of 17 million Euros begins.

The reconstruction to the new school comes to its end with giving a new name to the school: Heinrich Metzendorf School in 2004. Franz Heinrich Metzendorf (1866-1923) was a stone cutter and architect at the Bergstraße region. The establishment of school social work and counselling falls into the period of office of principal Matthias Hegyaljai. Besides that the technical orientation of the school of the trade-technical area gets complemented with the service sector: the hotel- and restaurant professions are moving in - very much to the well-being of the needs of the catering trade. In 2005 a media centre gets opened.

The Metzendorf-society gets founded and takes care of the heritage of the eponym of the school. The school gives itself a concept: “students first”. For the first time a pedagogical manager got hired, whose task it is control schoolwide pedagogical processes. Vocational orientation gains in relevance: there are numerous cooperation projects with submitting schools and regular apprenticeship- and study information days. A committed social pedagogical and school counselling company takes care of students and teacher.

In 2012 the outer building gets a fundamental reconstruction. In 2015 the new building “Metzeria” gets officially opened: for the first time students and teachers can get lunch in a really nice environment. The media centre gets extended with a self learning centre. The administration wing gets rebuilt: a new school secretary`s office (one central office and separate offices for the secretaries) are getting arranged.

Students build a copy of the “Metzendorf-gate” with milled sandstone. It is put up in the foyer as a symbolic “gate to education”. The Kreis Bergstraße helps again with an investment of 3 million Euros for further measures. The teachers get modern team offices. The equipment of the school gets modernized permanently: computers and their nets, laptop wagons, interactive boards and beamers, the renewal of the machine park as well as a big contribution for the environment through energy-efficient lightning, heating, insulation of the buildings and the windows. The higher vocational school stops due to a lacking demand. The school becomes central school for teenage refugees and has students from over 49 nations. In a “trilogy of cultures” and many more actions teachers and students are learning to design the increasing internationalization of the school.